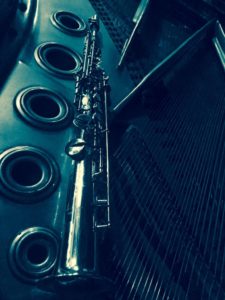 Lisa is a performing and recording artist in jazz, classical and popular music. She is a saxophonist, pianist and vocalist.

Lisa studied saxophone and piano at the Royal Northern College of Music She has studied with some of the world’s most renowned saxophonists in the classical, jazz and popular music fields.

Lisa has given world premieres of works written especially for her, recorded and broadcast live on BBC radio and TV. During her time at the RNCM she won the RNCM chamber music prize and was a finalist in the Royal Overseas League competition. She has performed at concert venues including Wigmore Hall, The Barbican and Bridgewater Hall.

Lisa can be seen performing regularly as saxophonist and vocalist in and around Cheshire and Manchester at live music venues. She enjoys working and collaborating with a wide variety of musicians in many different genres. She records regularly at The Big Red Studios with Jake Evans as producer. Look out on social media for new updates.